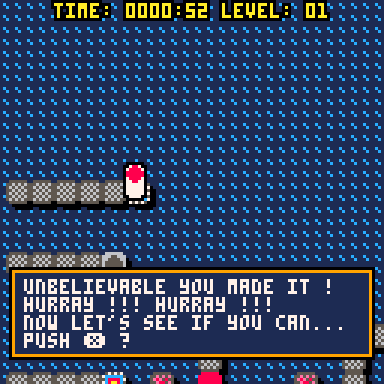 As previously announced here, a new version of Stones is coming… slowly but surely

The goal is to take care of every remark and to polish the game with more levels. After PICO-8, the journey will continue on GameMaker Studio 2.

Before the big jump, some features are tested :
– smooth camera,
– 70 percent of the area in from of the player,
– …

The musics of the game are made by Daniel O’Connor. Click on the image below to get a preview of the main theme…

If you made some levels and want them to be included, it’s time to send them.

After some years of use on Windows for busines purpose, I finally update my knowledge to the last version of C#. I have a good feeling for .NET Core on Linux with SFML or SDL2. So I past the exam and… 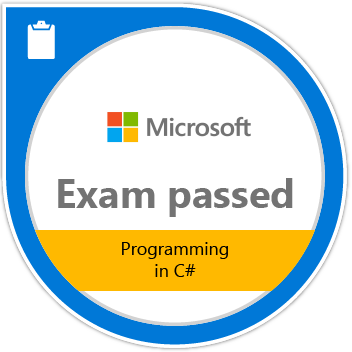 And you know what ? I’m happy !
jihem

From Saturday December 1st to Sunday December 2nd, 2018 was the Ludum Dare 43. The goal is to produce a game which complies with the theme in two days. The theme was Sacrifices must be made.

I made an entry on my spare time (6 hours) : Stones. The principle of the game is the following : you’re the Spirit of the stones and have to collect (and sacrifice) them. Will you find the path ? Could you resolve the gods challenge? Is 1min16 is enough for you to succeed ? Let’s play 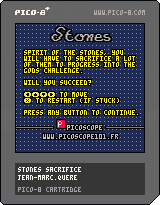 5611 users signed up for the competition.

A lot of comments about the game were made (thanks to their authors). I will use all the remarks to make a more polished version of the game.

A big shout to all the competitors (you made a game !!!)